When stories nestle in the body, the soul comes forth

Maggie, Gauri and I are all united by a passion for telling stories, and using creative storytelling to benefit our local communities. We strongly believe in the ability of stories to heal people, from the young to the elderly. We met last summer while participating in the course ‘The Storyteller at Play’ led by the International School of Storytelling in East Sussex. Since then a conversation filled with growing interest and passion, and an exchange of an idea with the prospect of creating positive change, grew from a small seed to lovely budding flower this week. We hope this flower will grow and multiply in the coming months. 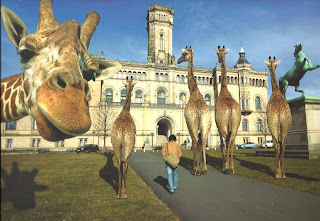 This is taking place in some country - it could be either Istanbul or Reading Wood. They are horses with long necks. They are giraffes, and they make ‘tchk, tchk, tchk, tchk’ noises. They are going horse racing, and are waiting to have lunch as they meet their mother. They are also waiting for their photos to be taken. They are growing so tall, they could jump high!

The man in the middle is not scared. He’s taking them for tea. They will be drinking tea out of the sea, they are that tall, but it is better they just have a cup of tea. ‘How lovely people are!’ they are saying. The one in the corner is saying ‘Roll on the horse racing! I’m Win, who are you?’ 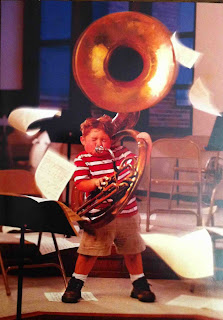 He is called William Thomas. He is a very pretty boy. He doesn’t look much like my dad. He’s blowing a trumpet of some sort, but it’s too big for him. He’s got to shoot up and get bigger to be able to hold the trumpet well. He’s here at Milton Grange. It’s a living room of some sort. It is too much of a mess. The trumpet is making a ‘do, do, dooot’ noise, but it should be louder than that. It should be ‘DO, DO, DO, DO, DOOOT’. Louder!

His mum is thinking that he’s wetting his trousers and the neighbours are thinking the same thing. The neighbours wished he played something quieter and that he was less smelly!

He’s blowing so hard, the music papers are flying all over the place, or it must be a bit windy in that living room. It is the noise of the wind that makes the music. He’s not reading the music, he’s just playing the trumpet.

We thank Ann, Barbara and Barbara, Bill, William, Mary, Sylvia, Winifred (Win), Maria, Angelica, and the support of Carol, Sheila and Grant, for their participation and creativity.

How moving this is. really lovely