Creative Storytelling with the Elderly II

We ran our second creative storytelling session with our elderly friends in the same care home in Hove, Brighton. It was great to see Gladys, Olive, Peggy, Rita and Hazel again. Although we did promise we'd come back this Saturday, we had forgotten to call to confirm with the carers. So our visit was a nice surprise to them. This week's story is called 'Jason the Polar Bear': 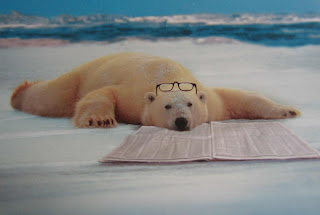 It’s a place surrounded by snow and ice. It’s somewhere in the North Pole. It could be Alaska, or Canada, Iceland or the North of Scotland. This is Jason, Jason the Polar Bear. He should be a happy bear because he’s in his own environment. But he doesn’t look very happy to me. He looks a little lonely. Maybe he would be happier if he had a friend next to him. He’s unhappy because his girlfriend just left him. He’s frozen stiff and he wants to be in a cave, somewhere north like Norway. But he doesn’t mind being frozen, he’s used to it, he likes the cold. He’s a fat bear, Jason, imagine having him sit on your lap! Jason shouldn’t be so sad, there are plenty more fishes in the sea. Besides, I don’t suppose he wants another girlfriend quite so soon. His parents went for a long walk along the coast sometime ago, and are now having a dip in the sea.

Jason had gone out to buy a newspaper from the local shop. He’d taken his reading glasses with him, but he slipped and fell flat on his stomach, and he dropped his glasses. The reason why he went to buy his newspaper was to check his bingo in the paper. He’s also very interested in sports. Jason loves ice hockey and he loves running. He’s reading the sporting life section of the newspaper. Since Christmas is round the corner, he’s getting ideas as to what presents to buy for his family.

It’s worrying to see how he’s going to get up. You’d need a crane to lift him up. It’s so icy and he keeps slipping. He could use his back feet first and then push up. Or he could roll onto his side to get up. He finally manages to get up and make his way into the water for a long swim.

Jason loves to eat meat, old rabbits and fish. He couldn’t eat the car from last week, as it’s a bit smelly. He grabs some fishes in the water and eats them. He goes to the toilet first and then he lies down on the ice and has a sleep. It’s a quick light nap, because it’s too cold to sleep on the ice. When he wakes up he puts the kettle on and makes a pot of tea. He then goes for a long walk to find himself a new girlfriend. He then invites his new girlfriend and his friends over for tea.

Nine months later, a little polar bear was born. It was a son, and he called him Robert.
Posted by Talinita at 1:24 PM

Taline, I am so pleased to hear of the work you are doing with elders storytelling. This resonates with me on a number of levels:

- respect for a human life, and the rich experiences that come from each and every one

- the chance for people to be heard, and to hear themselves in reflective dialogue

- the potential for intergenerational perspectives to be shared

Looking forward to meeting up as soon as we possibly can